In the second part of this tutorial you will learn how to create sinusoidal flow profiles using JavaScript functions. To do this, you modify the script from the first part so that a sinusoidal profile is generated instead of a sawtooth profile. Before you start with this second part, you may want to read the first part of the tutorial here.

Now open the script Tutorial_Sawtooth_Profile.qsc that you created in the first part of the tutorial and save it under a new name. You should then see the following program in script editor. 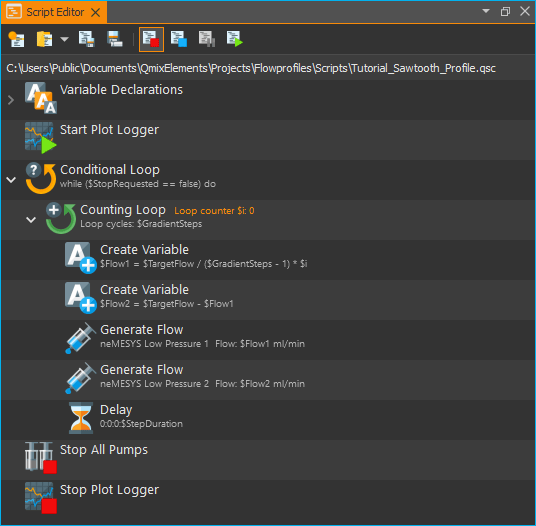 The goal of this script is to generate a flow profile in the form of a sine wave from 0 to the defined target flow rate with one pump and to supplement the flow of the first pump with the second pump in such a way that the sum of the two flows results in a constant flow with a defined flow rate.

To generate the profile, the flow rate of the pump must be changed step by step so that a sinusoidal profile is created over time. The number of steps for generating the sine profile, i.e. the resolution, should be set to 100 steps for one sine. In the previous sawtooth script you had set the number of steps to 20. Therefore change the value of the variable $GradientSteps to 100.

Adjusting the resolution (number of steps) for a sine profile

Now delete the two Generate Flow functions as shown in the figure below. To do this, select both functions and then delete them using the context menu (right mouse button) or by pressing the Delete key.

Now insert a new variable before the two existing variables in the counting loop. Name the variable $Sinus and select JavaScript Expression in the Type field.

The $Sine variable is used to store the calculation of the sine value for further processing. To calculate the sine value, use the JavaScript function Math.sin() together with the constant Math.PI. Enter the following into the input field for the JavaScript expression:

To check the calculated value of the $Sine variable, you can display its value in the graphical logger. To do this, you have already created the virtual I/O channel Script Value 1 in the first part of the tutorial and added it to the graphical logger. Now insert the function Write Device Property ❶ into the script. Then configure the function as shown in the figure below.

In the field Value to be written ❷ enter the variable name $Sinus. In the Device Property area ❸ select in the Devicefield the virtual channel Script Value 1. In the Property field select the property ActualValue. You can now read the function as follows:

Write the value of the variable $Sinus into the property ActualValue of the virtual channel Script Value 1.

The sine oscillates between 1 and -1 as expected. For the sinusoidal flow profile to be generated, the flow rate should oscillate between 0 and the target flow rate. In a first step, the sine value should be adjusted so that it oscillates between 0 and 1. You can achieve this by shifting the sine on the Y-axis upwards by 1 and then halve the amplitude. To store the new value, we use the existing variable $Flow1 ❶. This can now be calculated like this:

Now delete all data from the graphical logger again and activate automatic scaling. Before starting the script, check that the syringes of both pumps are filled. Then start your script. If you have entered everything correctly, you should see how the following flow profiles are generated in the graphical logger:

You have now learned the basics of how to use JavaScript in the script functions – e.g. to perform mathematical calculations. Apply what you have learned, for example by programming a script that generates two sinusoidal flows, where the sine of the second flow has twice the period of the sine of the first flow. Use the graphical logger to check the results.

In the third part of the tutorial you will learn how to add an initialization routine to the script, how to wind up the syringes and get tips on how to improve the readability of your script and how to document your script.

The QmixElements project with simulated devices and the scripts created in the first and second part of the tutorial can be downloaded here.