In their latest publication, a team from the laboratory of Thomas Gervais, at École Polytechnique de Montréal set the foundations of “microfluidic multipoles”, a new kind of open-space microfluidic systems. The experimental demonstration of the principles exposed required the use of up to 12 Low Pressure Syringe Pumps neMESYS 290N. The pumps powered microfluidic multipoles were further used to automate an immunofluorescence assay on an antibody array. 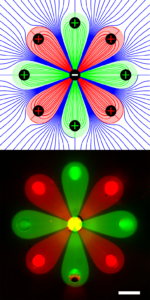 Specially developed and 3D-printed sample heads were used, which were positioned in close proximity with the surface to be processed. By simultaneous injection and aspiration of fluids from the numerous apertures, periodic patterns of confined reagents could be formed on the surface. The flow under these devices could be modeled by using a direct analogy with electromagnetic theory (so-called multipoles). Under this analogy, the neMESYS pumps impose a flow rate which is analogous to a constant charge in an electrostatic field. The flow streamlines generated are, in turn, mathematically analogous to the electric field distribution around charges and can be modeled easily. By using the fluorescent dyes, the patterns could be further visualized and analyzed by fluorescence microscopy.

With their publication in Nature Communications this year, Goyette, Boulais, et al. provide new tools to design and perform surface processing and biological assays to further the development of open-space microfluidics. The setup for the investigation of multipoles could be realized with a modular and high-precision CETONI dosing system. In order to generate continuous multipoles with sub-millimetre accuracy while minimizing reagent consumption, an extremely uniform and pulsation-free fluid flow is required. The neMESYS precision syringe pumps are ideally suited for precise dosing of smallest fluid quantities.

The PID-regulated drive unit of the syringe pump ensures an extremely even drive of the syringe piston, prevents stick-slip effects and thus guarantees the high accuracy and pulsation-free flow of the generated fluid, which was a prerequisite for this application. Due to the modularity, the setup can also be extended at any time. 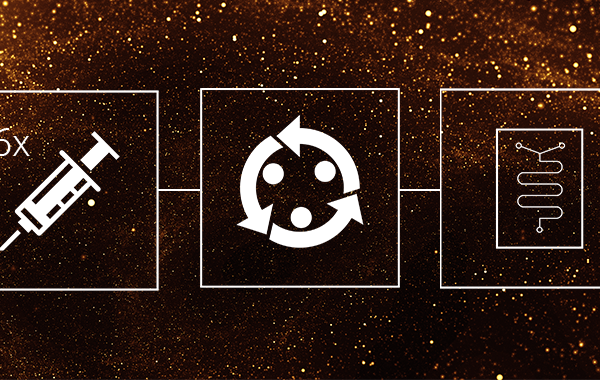